Despite the rain, we enjoyed a fantastic day on Saturday with more than 50 young people from Bromley Deanery joining in with activities led by the Youth team from Southwark Catholic Youth Service to celebrate the forthcoming feast of Christ the King.

The theme for the day focussed on Jesus as the King of Hearts and began at 10.30am with welcomes, introductions and ice-breakers. 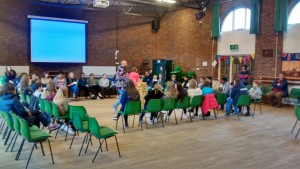 There were lots of activities, discussions, artwork and music to get involved with and a barbeque lunch which was kindly organised and led by the scouts. 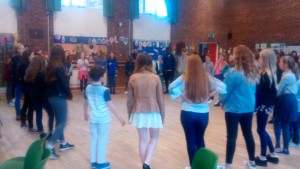 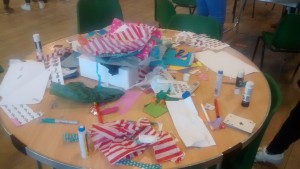 Finally the day concluded with a beautiful youth Mass at St Joseph’s at 6pm, which incorporated mime, music and the fantastic artwork created throughout the day. 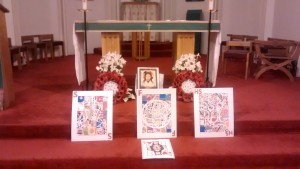 One of the most memorable elements was the following King of Hearts poem which was read by several of the young people during Mass:

Today we searched for the King of Hearts, Yet the card itself was hard to find

Arriving today with an early start, leaving our weekend ventures behind.

For the King of Hearts we searched high and low, and as small teams we led each other on the way

While searching for this mighty king of love, we did games, we did dance, we did laugh

Giving moments to the father above and as for the journey it was only half.

And although once we had all been strangers, we’ve got a lot in common we soon realised

We bonded strong to find the king, but the king we could not see

And as our day came to an end we could not think where he could be.

So we stopped searching for this King of Hearts, this Lord of power and might

We stopped to think, to contemplate and what then came brought us much delight.

For in that moment it would become so obvious, so clear

In fact the king of hearts was with us all along

In every game, in every laugh and in every single song

The king of hearts was throughout the day all around

And in me, and you, our brothers and sisters is where he can be found

Christ the king of hearts has been at the centre of this day.

So as we take this time to ponder, to hope and to pray.

Our heart transformed by gathering round this Eucharistic feast

How might we today fulfil our calling as Prophet, King and Priest?

A massive ‘thank you’ to Southwark Catholic Youth Team for their hard work, commitment and enthusiasm, to Terry and Margaret from the Scouts for the excellent barbeque, to all the CYM course members and parents who helped during the day and finally to all the young people from Bromley parishes who attended – we look forward to seeing you all again throughout the year!!